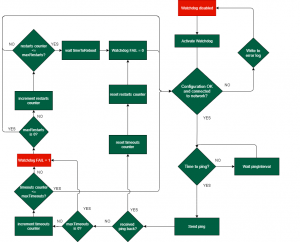 Watchdog is a tool that allows you to ping a given (IP) address using the ping command. In this way, you can eg. monitor the availability of a device connected to the output or connectivity to the Internet.

In case of failure, it is possible to invoke a follow-up rule-based action (see Rules). Output of Watchdog is the variable FAIL. It shows value TRUE when evaluation ends with a failure or FALSE when pinging is successful.

The Watchdog monitors specified IP address. The ping is sent every 60s and waits 5s for the device to respond. If the ping fails twice in a row, Watchdog returns FALSE and restarts the device (Rule for the restart action must be defined separately, see Rules). After the device restarts, it waits 120 seconds and starts monitoring again. This cycle repeats for a total of 3 times. If the device does not respond even once, the Watchdog remains in error.

The Watchdog monitors specified domain. The ping is sent every 10s and waits 5s for a response. If the ping fails, Watchdog waits 180 seconds and tries again for a total of 5 times, then returns FALSE. Subsequently, an action is called to restart the device (Rule for the restart action must be defined separately, see Rules).

Note: In case of unsuccessful domain translation (eg communication with the DNS server fails), error will be written to the device log. Failed DNS resolution therefore prevents pinging of URLs, but has no effect on pinging IP addresses. Eg. pinging local network IP addresses will continue to work.